The 1435 mm Rail Baltica railway from Tallinn to the border of Lithuania and Poland will be constructed over its length of 870 km as a new double-track electrified rail infrastructure on which international passenger trains will be running at speeds up to 249 km/h and freight trains at speeds up to 120 km/h. Construction of the Rail Baltica (RB) has started in all three Baltic States. 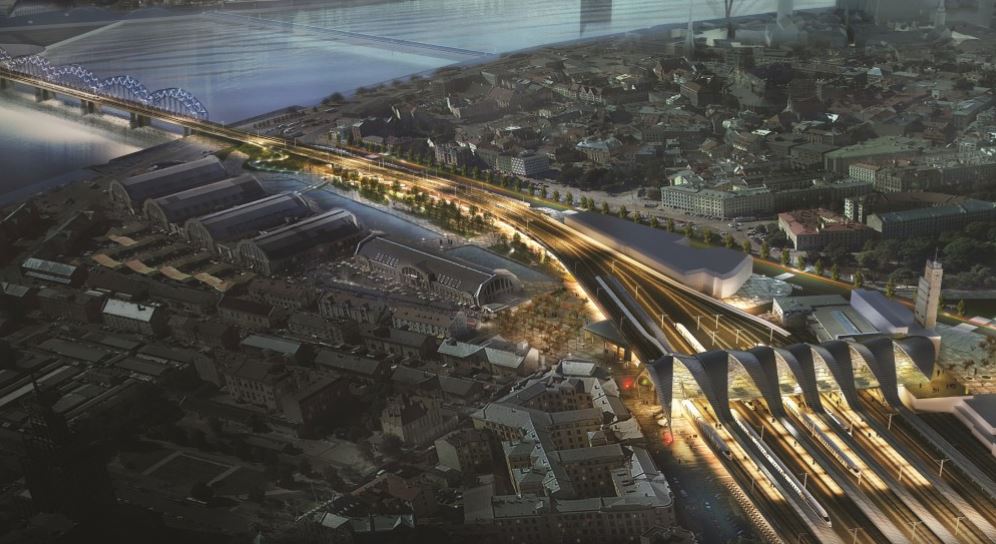 Tõnu Grünberg, the CEO of Rail Baltic Estonia OÜ said in his presentation to the members of the Rail Baltica Business Network that the key projects in RB’s Estonian section (main line, passenger terminals) are covered by design contracts. This year also the first construction contracts were signed and the construction of seven bridges and overpasses have started. The acquisition of the land necessary for building RB, which in Estonia is carried out by the Land Board, is concurrently in progress.

Major construction work on RB passenger terminals has started in Riga International Airport and in Riga city centre, which will gain an entirely new transport node that will offer convenient interchange between railways of different gauges and the public transport. Very recently the RB implementing body in Latvia announced an invitation for tenders for the construction of Rail Baltica main line in Latvia for sections of over 200 km in total.

In Lithuania the land necessary for the construction of RB on the section bound for Latvia has been acquired by now, design and construction procurements for the new railway are also in progress. Tenders for the procurement for the construction of the RB line’s longest bridge across the Neris River have been received and hopefully a contract will be signed within the coming months. On RB sections south from Kaunas to the Polish border and eastbound to Vilnius the special planning and design procurements are in progress, concurrently with preparations for the maintenance depots, the Paneveźys junction and local railway stops.

The much-discussed issue of funding for Rail Baltica has been gradually arranged as the project is progressing. Although by now RB has been in the works throughout several EU multiannual budget periods, the construction of the new railway through the Baltic States has stayed among the Union’s six most important infrastructure projects. To date, a total of 1.2 billion euros has been allocated to the RB project from the Connecting Europe Facility (CEF). The co-funding by EU available for the project also remains very high – up to 85% of the eligible costs.

According to RB Rail AS, the joint venture of the three Baltic States established in 2015 for the implementation of the Rail Baltica, so far 217 contracts have been signed for procurements with different Baltic companies (registered in Estonia, Latvia or Lithuania) and with about 50 companies from other EU member states or third countries.

As agreed among the Baltic States, procurements for some materials and services will be carried out in a centralised manner by the RB joint venture. Such consolidated procurements for major purchases of rails, sleepers, switches, ballast, etc. have already started. Procurements for concrete elements, noise barriers and fences are also on the way. Procurements for the design and construction of the electrification and traffic management systems for the future railway are in the preparatory phase.

Lengthy and complicated discussions among the Baltic States have been due to the question how the future railway infrastructure will be managed, including how the railway capacity will be allocated, the access charges imposed and collected, etc. Considering the need to effectively operate a relatively short railway and ensure its users the most convenient access possible, Estonia and Latvia have so far been supporting the approach that in the future this should be done by a single (joint)venture. Lithuania however, with making reference to domestic laws and considerations of national security, has been insisting that each Baltic country itself should operate the RB infrastructure on its territory.

To break the impasse, an agreement was recently made to conclude a thorough framework agreement that will set out the methods for calculating the track access charges, mechanism for capacity allocation, railway maintenance standards, provision of services to the railway undertakings using the tracks as well as other rules necessary for the daily functioning of the new railway. An appropriate expert group will have to prepare a detailed model by 2025 based on which the three enterprises could operate the single railway in co-operation as efficiently as possible.

Rail Baltica will be complete by 2030

Although the COVID pandemic has caused problems and delays for RB as well, today it is safe to say that Rail Baltica, also called the Baltic project of the century, has made substantial progress. It is true that the initial completion deadline set for the project – the year 2026 – proved too ambitious. The new deadline made public just last month – the year 2030 when the new railway should be opened for passenger traffic – sounds rather realistic, especially in the light of the project’s good progress in the recent years.

Be sure to contact us should you have any legal questions relating to RB (access to the procurements, expropriation of land, etc.) or if you want to join the Rail Baltica Business Network www.rbbn.ee.

TRINITI advises Krakul in its acquisition by Bercman Technologies