TRINITI partner on a discussion panel at the Futurism Conference with Hyperloop One, Rail Baltica and Virgin Trains

On September 7th, 2017 TRINITI partner Tõnis Tamme moderated a panel discussion „Future on the Rails“ at the “Futurism Conference 2017” in Tallinn, Estonia. Baiba Rubesa, CEO and Chairperson of the Management Board of the joint venture RB RAIL AS, Dr. Alan James, VP Global Business Development of Hyperloop One and Mark Pettman, Innovation Manager of Virgin Trains East Coast as panelists discussed the future of mobility, technologies, customers’ needs, sustainability, innovation and operational viability. 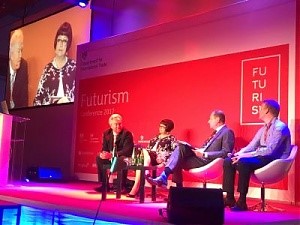 The “Futurism Conference”, organized by the British Embassy in Tallinn and Department for International Trade, invited to take the drivers seat in creating the future. The centrepiece of the entire conference are future technologies, cyber security and new business models in transportation and logistics. These and many other topics are discussed today by international and innovative organizations and giants of innovation – RB RAIL, Hyperloop, Uber, Starship, Cybernetica and other industry pioneers willing to change the way we think about mobility and cyber security. The event brought together transport experts from United Kingdom, Estonia, Latvia, Lithuania, Finland, Sweden, Norway, Denmark, Iceland and other countries.

Baiba Rubesa pointed out that “the Rail Baltica – the largest Baltic-region infrastructure project in the last 100 years will not only integrate the Baltic States into the European railway network, but also will act as a new value platform for digitalization and innovation in the region. “The project is a platform for innovation and involvement of the Baltic-Nordic start-up community and educational institutions to develop new digital solutions on the backbone of Rail Baltica – both on the infrastructure and the user side,” says B. Rubesa. She confirmed that according to present plans the first regular passenger train service on Rail Baltica should start its operations in 2026/2027.

Alan James shed the light on the plans and progress of Hyperloop One which was established only in 2014 following the inspirational idea on the very fast form of future transport by Elon Musk (Space-X, Tesla). The company has successfully tested its prototype called the “Pod” on the 500 m long testing site in the Nevada desert and aiming have three new transport systems operational by 2021.

The revolutionary transport system would reduce journey times dramatically allowing for example to travel from Stockholm to Helsinki in 28 minutes. If fitted with a Hyperloop the travel time between Tallinn and Helsinki on a fixed link would be around 6 minutes only, said Alan James.

You can see the panel discussion video here.