Article by Valter Võhma, attorney-at-law at TRINITI specialised in advising the startup and venture capital sector.

When an investor opens a newswire today various alarm bells start ringing, stretching from the aftermath of COVID-19 on the economy to the effects of war in Ukraine to the looming food crisis to high energy prices, to high inflation and numerous geopolitical tensions quietly simmering around the globe. Does a venture capital investor care about all of this? Should an investor care? This article will dig deeper into the first issue on the plate – effects of COVID-19 on venture capital investments in Europe – with the aim to provide conclusions on the effects based on numerical data available.

What changed in the beginning of 2020 with COVID becoming a world-wide pandemic?

COVID hit Europe at the end of 2019/beginning of 2020. It took everyone by surprise, cities and countries were locked down causing hardship not only to individuals, but also to entrepreneurs. Many countries opted to provide state aid for various sectors to help entrepreneurs survive the substantial downfall in business caused by measures taken to stop the spread of COVID. How did all this effect the startup and venture capital market?

Based purely on my own practice, in Q1 2020 the investment activity in Estonia (also Baltics?) reduced significantly, lot of deals were put on hold, negotiations were delayed/extended and there were almost no new deals being set up. In Q2, things started getting better, the deals, which had been put on hold, proceeded, and also new deal-flow started coming in.

If we look at the 2020 numbers in Europe, then the biggest markets in Europe – the UK and France – saw a small decrease in investments made. In 2020, UK ended up with ca USD 13.7 billion invested (down by ca USD 0.9 billion compared to 2019) and Germany respectively ca USD 5.4 billion (down by ca USD 1.3 billion compared to 2019). France, Sweden and the Netherlands being the following three biggest players in 2020 all saw a slight increase in numbers compared to 2019.[7] Regardless of the COVID, 2020 still manged to end up with basically the same results as in 2019 with around USD 40 billion invested into European startups.[8] This was all down to very strong Q3 and Q4 with total raised capital of more than USD 10,4 billion in Q3 and ca USD 11.8 billion in Q4.[9]

If we look at the statistics in more detail, we can conclude that the number of seed and angel investments decreased substantially in 2020, from ca 1233 in Q1 to ca 715 in Q4.[10] Despite this, the aggregate amount invested did not vary much, being between USD 0.9 billion – USD 1.0 billion per quarter.[11] The conclusion here is that in 2020 angels made fever investments in each following quarter, but the investment amounts themselves grew. The same dynamic in terms of number of deals can be seen in early-stage investments, however the investment amounts in Q3 and Q4 increased significantly compared to Q1 and Q2.[12] With late-stage investments it is a different story. The number of investments stayed about the same all year, except Q3, but the amounts invested increased quarter by quarter with Q4 topping off at USD 7 billion[13] (that is an increase of USD 2 billion compared to Q3).

Poll from 2021 showed that 88% of the VC-s were more optimistic about the future of the European technology sector compared to (then) 12 months ago.[14] 2021 was a record year for the European startup and VC sector with more than USD 100 billion invested. That year Europe gained 98 new unicorns and the number of decacorns doubled.[15] This means that the good pace taken up in Q3 and Q4 of 2020 accelerated substantially in 2021. The huge increase in investments did not only happen in Europe, in 2021 global VC investments amounted to USD 643 billion, this is almost twice as much as in 2020 (USD 335 billion).[16] 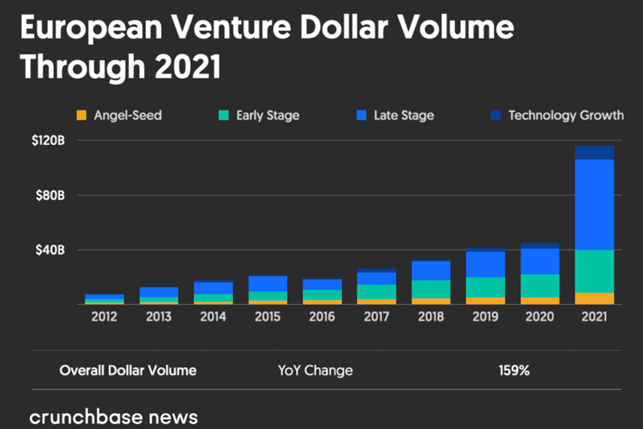 The investments in the biggest markets in Europe grew considerably in 2021, UK with ca USD 27 billion total invested, Germany with ca USD 12.4 billion, France ca 8.5 billion, Sweden ca USD 7.1 billion and the Netherlands with ca USD 5 billion.[17] London, Berlin and Paris continued to be the centre of attention with ca USD 32 billion raised in 2021.[18] Also the number of large rounds increased, the first nine months of 2021 saw more than 150 funding rounds exceeding USD 100 million and 57 funding rounds exceeding USD 250 million, with the UK being the country with most USD 100 million plus deals (more than 60).[19] All in all, it is fair to say that 2021 saw an unprecedented growth in the sector with almost doubling up on the investments compared to the COVID fated 2020.

What effect will the war in Ukraine have on the sector?

Although Q1 of 2022 saw growth, Q2 has had significant decrease in investments, especially in the late-stage deals, which have dropped from USD 19.1 billion in Q1 to 13.7 billion on Q2.[21] It is quite clear from the statistics of Q2 that early-stage and late-stage investors both have slowed their investments in Europe. 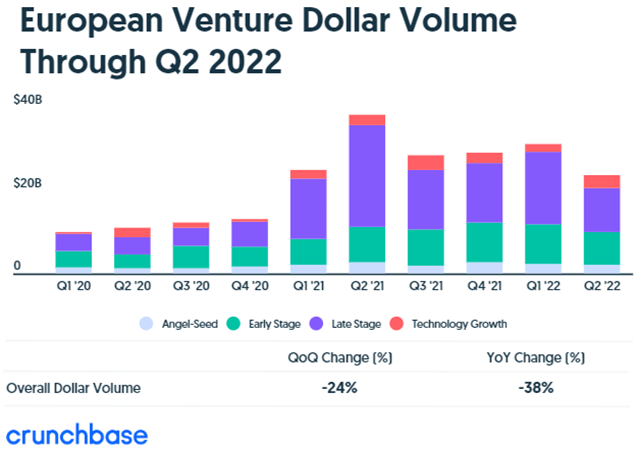 War in Ukraine has, by this date, affected the entire world, not only economically, but also psychologically. The prices of raw materials have gone up, there is a substantial inflation, the interest rates are increasing, and Europe is facing difficulties in supplying itself with reasonably priced heating for the winter. Based on the above statistics and that there seems to be no factual evidence suggesting that the war in Ukraine will come to a quick end, it is difficult to believe that the growth we saw from 2020 Q3 to 2021 Q2 repeats itself any time soon.

However, Estonia has been an exception so far with the capital invested by Q2 exceeding EUR 850 million (ca USD 866 million)[22]. Whether this trend continues also for the reminder of the year is to be seen.

In conclusion, it can be said that based on statistics, COVID pandemic effected the startup and venture capital sector in Europe. The most visible effect was on the number of angel and seed investments and early-stage investments, which went down considerably all over Europe following the spread of COVID. COVID-s effect on late-stage deals was not substantial, it just reduced the growth of amounts invested during Q1 – Q3 of 2020. All in all, due to the strong results in Q4 of 2020, the total amount invested into European startups 2020 remained similar to what it was in 2019.

This article is based on the publicly available data and therefore the author does not offer any guarantees on the correctness of such data. This article has been written with the intent to analyse such data and summarise the findings.

International trade and intellectual property protection risks – what provisions are necessary in a contract?

Recent changes to the Labour Code – what are they? Overview & recommendations